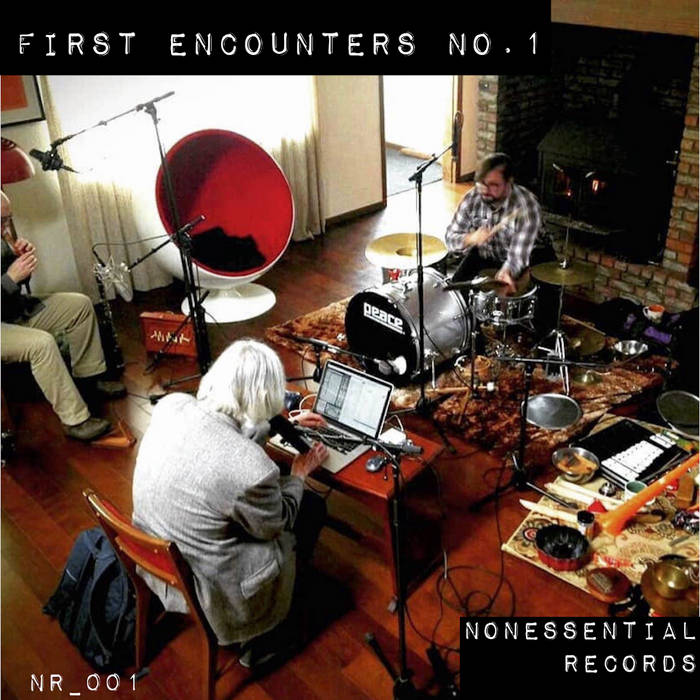 
This is the first recording released on Nonessential Records, formed in September 2019 by the curators of the Interference Series. This recording captures some of the spirit of the series - bringing in amazing artists to Flagstaff and finding ways to interface with local artists. This recording is called "First Encounters" in reference to the practice in the world of free improvisation of a performance where improvisors are literally playing together for the first time. This recording, performed live and in three segments in the studio, is true to its title.

Jaap Blonk is a world-renowned practitioner in the avant garde and experimental music scenes, known primarily as a sound artist and as a visual/stage performer. One of his early influences was Kurt Schwitters, whose Ursonate he first heard in 1979; he memorized the entire work, and it became one of the cornerstones of his repertory. His compositions and performances are often examples of sound poetry, making use of words and phonetic snippets as well as clicks, hisses, and other vocal manipulations.

Clarinetist, composer, and improviser James Falzone is an acclaimed member of the international jazz and creative music scenes, a veteran contemporary music lecturer and clinician, and an award-winning composer who has been commissioned by chamber ensembles, dance companies, choirs, and symphony orchestras around the globe. Educated at Northern Illinois University and New England Conservatory, James is also a respected educator and scholar and has been on the faculty of The School of the Art Institute of Chicago, Deep Springs College, North Central College, and was a fellow at The Center for Black Music Research. Currently, James is the Chair of Music at Cornish College of the Arts in Seattle, Washington.

Owen Davis is a composer, percussionist, improvisor, noise artist, educator, and curator based in Flagstaff, AZ. His artistic work is animated by noise - searching out ways to find and make it in composition, improvisation, and other artistic endeavors. He is an active recording artist, improvisor, and new music performer nationally and internationally, frequently collaborating or composing for projects and performances.

Writer, musician, and teacher Rob Wallace holds a Ph.D. in English Literature from the University of California, Santa Barbara. He has performed and recorded with musicians from around the world. His recordings can be found on the pfMentum and Ambiances Magnétiques record labels. He is the author of Improvisation and the Making of American Literary Modernism (Bloomsbury) and co-editor (with Ajay Heble) of People Get Ready: The Future of Jazz is Now! (Duke). He is one of the co-curators of the Interference Series and is a Lecturer in the Honors College at Northern Arizona University.

This album was recorded on February 23, 2019 at Mudhshark Studios in Baderville, AZ (outside of Flagstaff, AZ)

Big thanks to Sandra, Jess, and David at Mudshark as well as James and Jaap for making the journey to Flagstaff.

Nonessential Records is the subsidiary record label and archival recording project under the Interference Series based in Flagstaff, Arizona. The label aims to record and produce high-quality sonic objects, in both physical and digital formats, of featured artists in the Interference Series throughout its season's programing and beyond. ... more

Bandcamp Daily  your guide to the world of Bandcamp